Happy Monday, Angels! In case you haven’t heard, my amazing publisher, Foundations, LLC, has released Vengeance Marked, Book One the Alyx Rayer Trilogy, and today’s the big day! Please see below for links to purchase your shiny new copies.

Love to all
xoxo

Her Marked was more than just precious to her, he was precious in ways the world could only fathom. If she failed, she failed everyone.

Alyx Rayer’s existence in Atlanta, the eternally bustling capital of Georgia, is one of routine and blending in among the worker bees. But her ‘normal’ life is a facade for a higher calling. She’s a three-hundred-year-old soul, sent from the darkness to capture her Marked when summoned by her superiors. Until then, she’d supposed to keep her distance.Except… something about him makes it hard to stay away.

While already trapped between honor and desire, a man in a black suit continually shows up when she least expects it, his presence evoking a strange response from the scar she was branded with at birth. Because her superiors never told her what this would mean, or much of anything except what to do when they summon, she can only conclude to try and keep her sanity-and her life-from completely shattering to pieces.

This engaging first book of the series is a Paranormal Romance novel interlaced with twists, turns and thrilling suspense that is sure to satisfy readers of any genre. 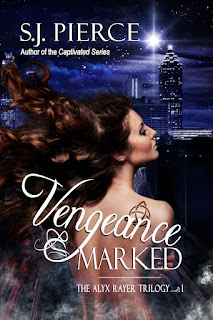 Available at the following retailers for $2.99: