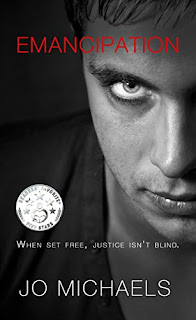 Publication Date: March 19th, 2016
Genre: Psychological Thriller
My Rating: 5 out of 5 Stars
Where to Buy:
AMAZON
Here’s the Summary:

Tobias Butler has been sitting on death row since being sentenced for a gruesome murder in 2007. Bored out of his mind, he decided to apply to the online penpal program in 2012. It’s a pleasant distraction—nothing more, nothing less—for three years, until he’s contacted by a beautiful, smart young lawyer named Jess. She’s convinced he’s innocent and wants to see him freed. As they organize their attack on the judicial system, he wonders how she plans to get his conviction overturned—because he’s guilty, and he knows it. Jess is desperate to release him—and he’s desperate to feel his hands squeeze the life out of her once she does.

Emancipation was easily one of my top reads for 2016. I would even go so far as to say it was my FAVORITE read of 2016. Why? Because I rate a book based on how much it pulls me in and makes me forget it’s fiction, and Ms. Jo Michaels succeeded by leaps and bounds. Not once was I jarred out of the story because of typos, inconsistencies, sloppy prose, or unrealistic writing. I BELIEVED I was in Tobias’ mind. For the duration of the book, I was in the mind of a serial killer. Now that’s not to say that at times the story didn’t jar me in some way and I had to set the book down for a moment and catch my breath, but it wasn’t because of anything other than because Tobias is a sick, sick man. And if you read this book looking for ANY type of “love conquers all” or “bad boy romance” type stuff, you’ll be sorely disappointed. The only way you need to approach this book is with an open mind and a stiff drink, because after the last couple of chapters, you’re going to need it. Also, not that this really needs to be said since you’ve been warned about being in the mind of a serial killer, but if you can’t take cussing, dark thoughts, or disturbing imagery, then I would pick up a nice little cozy mystery or something.

Lets move on to the other characters in the story. I’ve already covered that Tobias is a sick man and how well Ms. Michaels portrays him, but lets not let that overshadow the leading lady, Jessica Phang (love the name, by the way!). Ms. Phang is a rich, busty attorney whose life goal is to get Tobias out of prison. Why? Because she’s followed his case since law school and knows in her marrow he’s innocent… even though he’s not. She’s feisty and driven, and even a little slutty, but don’t let that fool you; Ms. Phang has secrets too, and by the end of it all you’ll realize she’s much, much more. The other character worth mentioning is Tobias’ cell mate, Hector (aka Rooster). On the outside, he’s a rough-around-the-edges gangster, on the inside, he’s a scared man just trying to not make enemies or be on the wrong end of a shank. That’s good character development, my lovelies, and it also gives us a character to relate to. Who wouldn’t be scared out of their mind in prison?

Lastly, the pacing was perfect for a Psychological Thriller. Not at any point was I bored. All elements of the story were also nicely layered and pieced together. But like I said before, this was my favorite read of 2016. There wasn’t a thing about it I didn’t like.

So in short, if you’re looking for an entertaining, dark and twisty read, this novel is for you!

“There was no other feeling like it. He’d done research on drug addicts and what drove them, and his body reacted in much the same way. It wasn’t just the pleasure driving him, it was the relief from the agony.” 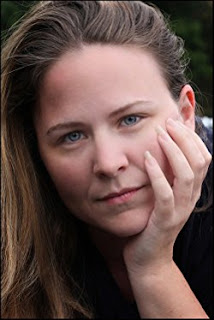 Hi, I’m Jo. Let’s forget all the “Jo Michaels is blah, blah, blah” stuff and just go with it. I’m a voracious reader (often reading more than one book at a time), a writer, a book reviewer, a mom, a wife, and one of the EICs at INDIE Books Gone Wild. I have an almost photographic memory and tend to make people cringe at the number of details I can recall about them and/or their book(s). My imagination follows me around like a conjoined twin and causes me to space out pretty often or laugh out loud randomly in completely inappropriate situations.

I have a degree in graphic design, and my journey to the end was one few students who begin that program ever complete. However, this was one case where my memory and OCD tendencies helped me. Graduation was one of the most amazing days of my life. But, my most amazing day was when my now husband proposed. Every little girl dreams of being Cinderella someday, and he pulled off the proposal of fantasies.