End of Days (Penryn and the End of Days, Book Three) by Susan Ee 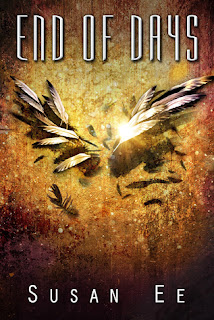 Publication Date: November 19th, 2013
Genre: Young Adult Paranormal
My Rating: 4.5 out of 5 Stars
Where to Buy:
AMAZON
Here’s the Summary:

End of Days is the explosive conclusion to Susan Ee’s bestselling Penryn & the End of Days trilogy. After a daring escape from the angels, Penryn and Raffe are on the run. They’re both desperate to find a doctor who can reverse the twisted changes inflicted by the angels on Raffe and Penryn’s sister. As they set off in search of answers, a startling revelation about Raffe’s past unleashes dark forces that threaten them all.

When the angels release an apocalyptic nightmare onto humans, both sides are set on a path toward war. As unlikely alliances form and strategies shift, who will emerge victorious? Forced to pick sides in the fight for control of the earthly realm, Raffe and Penryn must choose: Their own kind, or each other?

Since this is the sequel to World After, I’m not going to break this one down into my “the good, the bad and the ugly” categories. I’m reading this series because the first book caught my eye, and quite frankly, I fell hard. This series is everything. *pensive sigh*

So let’s start with everything I loved about this third and final installment, and I’ll try really hard not to give anything away. Raffe and Penryn’s love is as angsty as ever in the beginning. After they’re reunited, they spend a few days in hiding together and things start to get a little steamy… until Raffe has to pry himself away from her again and remind her (and himself) why their love can never be. He remembers what happened to his men all those years ago, how they’d been banished to the Pit to basically rot and become demons. Not to mention, he wants to be Messenger, and he can’t very well be gallivanting around with a human if he wants the position. It just wasn’t in the cards for them to be together. But don’t lose hope, my lovelies, because the ending will more than satisfy. 😉 And there are a few more sweet/ steamy/ tear-your-heart out moments in between.

Another great thing about this book is it gives you a little more background story on one of the nastiest characters – Beliel. And you start to find yourself almost feeling bad for him. That, to me, is the mark of a good writer: their characters aren’t all good or all bad. Something (or a lot of somethings) happened to them in life to make them the way they are. And sometimes, the good ones started out bad, or the bad ones started out good. And some of them are equal parts of both.

Something else that I loved was the author’s portrayal of Hell (the Pit) and the demon lords. And as a Public Service Announcement, her descriptions of the demon lords and their whips with human heads on the ends and what they do to fallen angels will make you lose sleep. These books are NOT for the squeamish, but they’re also amazingly descriptive and original.
I’m not worthy!!!
Now for the ending – the most important part of a series! I’ve already mentioned that readers won’t be disappointed with the way Raffe and Penryn’s love story ends (and lets be honest, that’s what the majority of us cared about), but we also want to know the fate of the world! What’s going to happen to the rest of humanity? Without being too spoilery, we learn that there will be a contest where angels will kill as many humans as possible, so will the human race be gone for good now? Not while our feisty little Penryn is still breathing! But that’s all I’ll say, other than to be prepared to gasp, dig your nails into something, and have to take momentary mental breaks so you can cope with what’s going on. Susan Ee gives us one heck of a fight scene at the end!
Now that I’m done with the things I LOVED, I’ll dig into the things that took away half a star… though I’ll still round it up to five because I’m so obsessed with the story and the characters. And let me preface this by saying that in the grand scheme of things, they aren’t even that big of a deal and don’t detract from the overall story; we’re still given one hell of a ride. But there are a few things that made me go “huh?”
****SPOILER ALERTS****
For instance, it’s a tad silly to me how an angel can have his wings sliced off and reattached so many times (three times, if I counted right), and then he flies around on them like nothing happened. I get that they’re angels and that they heal faster than humans, but when they get injured in other parts of the book, they need time to recover. And they’re freaking slicing through his wing joints! Sometimes not even with the careful hand of a surgeon. Twice, his wings are brutally cut off with axes or a sword. I just couldn’t reconcile that in my head.
Something else that didn’t seem right to me was that Penryn would be off taking care of other things while TRUSTING the winged scorpions to look after her sister Paige. The same sister she fought so hard to find and protect in the other two novels. Granted, Paige had some involuntary… alterations done to her body, thanks to a surgeon, and could better fend for herself now, and these scorpions were like her pets, but they were also unpredictable and it felt out of place for Penryn to trust them with a member of her family.
In conclusion, while there were a few things that bugged me, overall this was a fantastic ending to one of the best series I’ve ever read. Susan Ee has a way of sucking you with her writing and characters, and it won’t let go until the end. Be prepared to miss a lot of sleep!
About the Author: 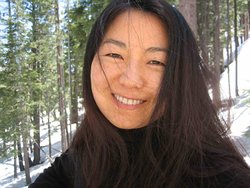