Moth to a Flame by Micheal Omer 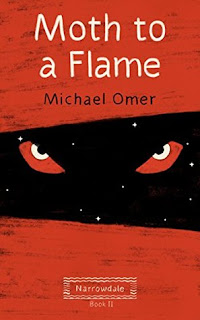 Publication Date: July 3rd 2015
Genre: YA Supernatural Thriller
My Rating: 4 out of 5 Stars
Where to Buy:
AMAZON
Here’s the Summary:

I was almost killed by a delusional murderer five months ago. Since then, the recurring nightmares, creepy hallucinations and overpowering fear are gone. That’s good, right? I mean, no one in their right minds wants to feel like that. I am starting to wonder if I’m in my right mind anymore…

When a lady in my neighborhood died, I couldn’t help but stick my nose in, to see what happened. I should just get on with things–I’ve got some new friends, and a cool boy named Chris has taken an interest in me. Everyone is telling me to just leave this weird murder alone.

But I can’t stop myself. The more I find out about her death, the more twisted everything is.

I think there’s a predator in Narrowdale. And now it’s hunting me…What have I gotten myself into?

My Thoughts:
The Good:
Let me just start off by saying that I love how this setting has endless possibilities. First, you have a clever girl who is prone to life-threatening idiocy, but only because she’s curious and has some sort of abnormal fixation on figuring out why strange things happen and solving murders. THEN, you throw her into a town where strange things repeatedly happen and people get murdered, so you could literally write book after book after book. You’re a smart man, Mr. Omer! But the the set-up isn’t the only good thing about his books. His POV character Amy is clever and curious (I know, I already said that), hates school and tests like the rest of us (which makes her relatable), is adorably clueless about love and boys, and is actually pretty dang witty. Maybe it’s because it’s been awhile since I read the first novel in this series, but I feel like her “funny” came out more in this one. I found myself laughing as much as I was wincing or screeching. And yes, I do all those things while I’m reading. My husband and kids and dog can attest to that 🙂
Another good thing worth mentioning is that Mr. Omer doesn’t write predictable stories. In Moth to a Flame, I wasn’t able to figure out who the killer was until Amy did. However, I did figure out another big reveal before Amy did, but I almost think it was intentional on the writer’s part. I won’t say much more than that for fear of giving it away.
The Bad:
There really isn’t anything bad to say about this book, other than I still wish we knew more about what Amy and her friends look like. We don’t get much more than hair color and body-types or accessories. And I couldn’t tell you what her parents look like at all. Perhaps Mr. Omer did describe them (and I’m sure he did), it just didn’t stick with me for whatever reason. None of that is really a deal-breaker though.
The Ugly:
Nothing to say in this category!
In Short:
Moth to a Flame is an excellent sequel to the first. I highly recommend this series!
Favorite Quote:
“How can everyone here be so loud? So cheerful? I want to scream at them to be quiet. I want to hit one of them. I want to kick the back of the seat in front of me. I want to smash the window and jump out. I want to cry. I do none of those things.”
About the Author: 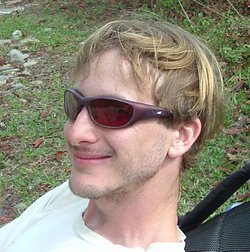 My name is Michael Omer, and I’m a writer, journalist and game designer. I wrote and published my first novel when I was sixteen, and figured I’d keep at it. Since then, I have published two more novels, and wrote… who can even count how many? I’m happily married to a woman who keeps pushing me to write more, and have three kids who insist I should stop writing and come play with them. I also have two dogs.
Visit his Amazon page here!