Blood and Spirits (The Coming Storm, Book 1) by Dennis Sharpe 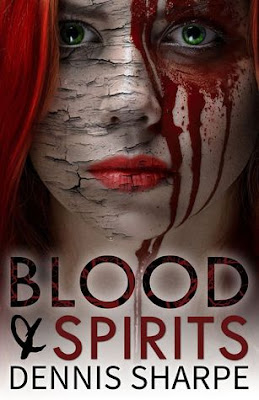 Release Date: December 23rd, 2014
Genre: Supernatural Thriller
My Rating: 4 out of 5 Stars
Where to Buy:
AMAZON
Here’s the Summary:

Small-town life can be hard for a dead girl…

For Veronica Fischer the night to night life of a bloodsucking madam in Middle America is tough enough before she adopts Rachel Gregory, an eight year old ghost.

After her house is set on fire and Rachel disappears, all signs point to foul play. When she finds herself with a hit out on her unlife and warrants for her arrest, it becomes clear she’s going to need help.

A raucous ride through the dangerous lives of the lecherous undead.

My Thoughts:
The Good:
The heroine. Oh, how I love a kick-butt heroine. One that’s in charge of her own life, that doesn’t play the victim or spends page after page whining about her circumstances and how she’s powerless to change them. And believe me, V would have every reason to whine or play victim, but she doesn’t. She puts on a killer outfit, makes sure someone can manage her business while she’s gone, and goes out and tries to figure things out on her own. Well, with the help of her ex-cop-turned-right-hand-man, Frank. Whom I love, by the way.
I also like the fact that, despite her trying to pull herself up by her bootstraps and take charge of her circumstances, she’s never really able to do so. She just keeps spiraling further into the rabbit hole. It makes for good suspense, and to be honest, it’s pretty realistic. Sometimes no matter how hard we try to take control of things, life slaps us across the face and reminds us who’s boss.
The characters are multifaceted. V is a redheaded kick-butt orphan vampire heroine who runs a brothel. Frank, her right hand man, is a witty ex-cop who likes men. The antagonist is a friggen zombie named Paco. So I guess you see my point – nothing but originality here. Even the secondary characters jump right off the page.
Garrett, V’s love interest. He’s yummy, mysterious and knows how to fight evil spirits. Can we clone him? 🙂
The writing was smart and engaging, with just enough sass thrown in to inject levity where the story needed it. I also never felt like the story dragged. Well done, Mr. Sharpe.
The Bad:
There’s hardly anything  bad at all to say about this book, but there is one scene in particular that I felt was a bit gratuitous, and it has to do with Paco collecting a ‘payment’ from V for his help. I’m by no means uptight and don’t get grossed out easily, but writing  a play by play of that scene was overkill in my opinion. Or maybe off-putting is a better way to put it. The idea of it was gross enough that the writer could have insinuated what happened or faded to black, etc. We didn’t need every. nasty. detail. And by nasty, I mean n-a-s-t-y, and NOT in a kinky kind of way. It almost felt like it was done for shock value. And then when V had sex with Garrett, a scene where we would actually care to know the details, it gets skimmed over. I demand a re-write! 😉
The Ugly:

Nothing to say in this category.

In short, this gritty supernatural thriller will keep you glued to the pages and clambering for Book Two. So when will Book Two be ready, Mr. Sharpe? 🙂

Favorite Quote:
“Is one easy night without a huge dry-cleaning bill too much to ask for these days?”
This made me chuckle. Poor V was always getting her clothes torn and nasty!
About the Author: 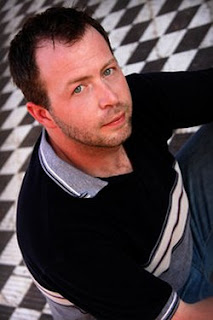 Born and raised in the middle of the American Midwest, Dennis Sharpe has been a writer as long as he can remember. His mother has told many people about the fantasy and science fiction stories he’d write on scraps of paper, and staple together as his ‘books’, before he’d attended his first day of formal education.

He has spent many late nights at diners and dives, drinking coffee with a tattered notebook to put a voice to his feelings of himself and the world around him, and other worlds that can exist only in fiction. The voices in his head don’t ever stop talking to him, and so sooner or later he has to get out onto a page all that they’ve filled him up with.

Inspired by Neil Gaiman, Kurt Vonnegut, Frank Miller, Chrissie Pappas, Charles Bukowski, Stephen King, Issac Asimov, and countless classic literary influences, Dennis continues with the ability to write what at a glance might seem absurd, but quickly begins to resonate with our own thoughts and emotions. He writes people we know, love we’ve known and lost (and found again), and places we’ve been in our lives and in our heads. Even his fictional characters and worlds carry enough of the grey areas we experience in day-to-day life, to let us find the truth in his words, no matter how fantastic.

These days he can be found still writing, drinking coffee with friends, or spending time with his children (the true joys of his life), in Western Kentucky.