Happy Monday, angels!!! I’m pleased to introduce another Paranormal Romance novel titled Altered by the talented Amy Stearman, and I’ll give you a moment to ogle the gorgeous cover below and take a WILD guess as to what it’s about. 😉

Love to all xoxo 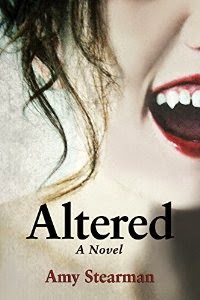 Unassuming law student Sadie Pratt leads a quiet life immersing herself in her books; outside of school, her only real form of excitement is researching the local flour mill and her link to its terrible history. That all changes one fateful night when her employer requests she meet with a mysterious client who will change her life in an unthinkable way.

Vincent Strickland has toured the country attempting to regain his holdings after serving a punishing sentence for his violent past. He is out for revenge when his path unexpectedly crosses Sadie’s, who he believes is his former lover reborn. He will stop at nothing to possess her.

Fallen deity Thayer Aubade has dedicated his life to The Creed, a secret sect charged with protecting the innocent from monsters like Strickland. When his team is dispatched to rescue Strickland’s latest victim, the scene he discovers feels all too familiar and he vows he won’t play by the rules this time.

Desire, possession, and treachery lead Sadie down a crooked path to redemption. She must rely on her intellect and inner strength for her survival… and for that of the man she loves.

She felt Vince Strickland’s icy stare upon her neck again as he ever so slowly reached his hand toward her. The pad of his thumb found its target at the hollow between her collar bones, and then slid its way up the column of her delicate throat. It was the first time their skin had ever touched. His fingertip was so cold it burned. Slowly, slowly his hand came to rest around her fragile neck, fingers fitted between the gentle rises of her vertebrae. The strange energy she’d come to associate with the mysterious Vince was now assaulting her senses in all the most terrible and wonderful ways.

Sadie watched, transfixed, as his features alternated between angular monster and magnificent Vince. In response, her survival instincts vacillated between sheer terror and feminine curiosity.

She had never felt so confused, so marvelously afraid, or so euphoric. Her body, she decided, was the worst kind of traitor.

Vince ever so slightly increased the pressure of his middle finger against the back of her neck, guiding her mouth closer to his own. She was helpless to fight it. The fingertips of his left hand came to rest against Sadie’s cheekbone then slid down her face, along her collarbone, and her arm, until he held her wrist in his chilly grasp.

“I was stunned, you know,” he murmured to her, eyes sweeping over her face, “That it was you who opened the door for me in this sleepy town.”

“That I …” Sadie swallowed, concentration fumbling. “That I did what?”

“It was fated, I know that now,” Vince continued unfazed. “That this was the final stop on my journey, and who should I find but you?” His gaze dipped to Sadie’s mouth. Unthinking, she wet her bottom lip with her tongue, and tried to focus.

“No. No, you wouldn’t. But I’m about to make you.” Vince’s grip on Sadie increased and her heart rate jumped in reaction. As though he was aware of the treacherous response her body was having to his nearness, he smiled, and it was sinful. Raw male power practically vibrated from him. Sadie could feel the dormant strength in those cold hands, tension coiled in every long muscle.

Eyes never wavering, Vince brought his mouth closer, closer to hers until she felt her breath reduce to shallow bursts. Light as a feather, he brushed his lips across Sadie’s, not quite a kiss, and then held her still with a deep inhalation.

Eyes closed and lips barely brushing hers, he murmured, “Answer me something, Sadie?” Then he inclined his head along with one brow. “Your Mr. McDonnell called you Sadie Jo.” He chuckled softly at her look of surprise. “Yes,” he all but purred, “I heard that private whisper even from across the room. Now tell me. What is your middle name?”

“My middle name?” Sadie was taken aback. Why would that matter?

“I already know, but I would like to hear it from your pretty lips.” With that, he brushed the pad of his thumb over her bottom lip, leaving a numbing sensation in its wake.

His smile was arrogant. “Named so after a relation of yours, no?”

“My great-grandmother,” she answered quietly, suspiciously.

“And do you happen to know what became of your great-grandmother?”

Dread pitted itself firmly in her middle and she began to tremble in earnest. “She was murdered.”

Sadie’s voice shook, she couldn’t help it. “By a Strickland?” 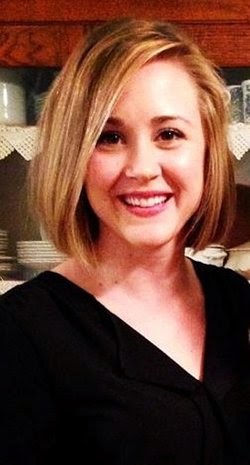 Amy Stearman is an avid reader and writer of stories, hailing from the Midwest. She lives in the liberal mecca of Kansas with her husband, young son, and ornery Sheltie.
Amy holds her bachelors degrees in Human Services and Victim Studies, and a Masters degree in Social Work. That might sound pretty cool, but she accidentally ended up in marketing.
When she’s not chasing her three year old or attempting DIY home improvement, she’s jotting down story ideas and dreaming big.