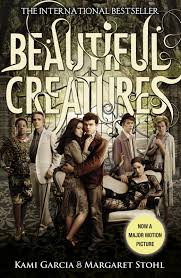 Released:  February 14th, 2013
Starring: Alice Englart, Alden Ehrenriech, Jeremy Irons and Viola Davis
Directed by Richard LaGravenese
Okay, so let me start this post with a side note that I have NOT read any of the books. I’ve heard great things, but considering that I work full-time and am also busy writing my novels, I’m selective about what I read, and I usually read Indie novels. That doesn’t mean I won’t pick them up one day, but I don’t see that happening any time soon. That being said, I enjoyed the movie. I wouldn’t say I was crazy about it and fan-girling all over the place, but I liked it enough that I’d watch it again.
The Good:
LOVED the POV character Ethan. I can relate to being from a small town and feeling as though life has more in store for me than settling down and going through the motions, just to live and die the way everyone expects. I also appreciated that his character was multi-faceted – jock, but smart and independent. He didn’t need anyone’s approval and values meaningful relationships. He knows what he wants and he goes after it. Oh, and did I mention he’s cute? 🙂
And as for Lena, I liked that it didn’t take long for Ethan to break through her tough and guarded exterior. I also liked that she was conflicted about what side would claim her – the light or the dark. We all battle with our own light and dark sides, and sometimes it’s hard to know which is stronger.
Her uncle – a dark caster who turned to the light to help his niece… instant likability factor for his character. He can be cocky and rude, but serves it up in such a way that you arent sure if its an insult or not (a true southern trait lol). The southern drawl helps, as well. 🙂 He’s also a man of conviction, an immovable force once he’s made up his mind. He gets shit done.
I also enjoyed Ridley, Lena’s cousin. She owns her darkness and is full of confidence. Probably one of the more one-dimensional characters, but when she was on screen, she stole the show… which I mainly attribute to Emmy Rossum’s performance!
As for the storyline, I loved that it didn’t drag. Everything developed nicely, and I stayed hooked from the first scene. I also bought the romance between the two main characters, which is important to me with romances. I didn’t feel like they forced the chemistry, and their love was sweet, but complicated. Not all-consuming and flawless, which is boring and unrealistic.
And the ending… oh, the ending! I won’t give a spoiler, but the whole monologue about sacrifice had me in tears. Really hit home. What wouldn’t you do in spite of your own desires to make sure someone you love stayed safe? That’s love, people.
The Bad:
Not much to say in this category except I would have liked for them to go into the types of powers Lena has. We only know she’s a caster, but what does that encompass? We know more about her cousin Ridley’s powers than we do the main character. I assume the book goes into more detail, so maybe that will be the reason I eventually pick it up one day.
Also, there were a TON of southern cliches… to the point where I was rolling my eyes. It was a little thick for my taste. And teenagers, now a days especially, haven’t ever even heard some of the sayings they’d written into the script. Hell, I was born and raised in the South and hadn’t heard half of what they’d said. I kept thinking, “Okay, I get it. This is set in the South.”
The Ugly:
I have nothing for this category. Well, maybe I would have liked to see Emily get smacked and that didn’t happen. 🙂
My Rating:
A strong B+
Favorite Scene:
When her uncle busted up in the church to set all of the judgemental idiots straight. Loved it!
Favorite Line:
“Well bless your heart, sugar. You must have been first in your litter.”